This month’s Random Fan is fellow Omnific author, Rumer Haven. Rumer recently published a fantastic novel entitled “Seven For A Secret” and we were thrilled to have the chance to chat with her about it.  You can purchase the ebook or the paperback here. 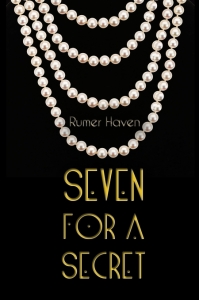 Morgan and Jennifer: Seven For A Secret is a paranormal romance, but that’s labeling it pretty simply. What else would you like readers to know about the novel?

Rumer Haven:  Great question, as this story isn’t easily placed into any one bucket. While it does have a paranormal element, the ghost’s main function is to join the present with the past, connecting two stories that are more human than supernatural. My publicist has described it as “Great Gatsby meets Bridget Jones,” as it’s half historical fiction and half contemporary, and whereas the historical half is full of drama, the contemporary half is romantic comedy. It’s filled with contrasts like this, I guess, from swept-off-one’s-feet romance to self-deprecating reality. And while young twenty-something and teenage characters drive the story, it’s arguably the old folks who save the day. These opposing elements all interrelate, though, balancing the story out to provide a little bit of everything for everyone. So you don’t have to be a fan of any one particular aspect to still (hopefully) enjoy the overall book.

Rumer Haven: Exposure is such a richly rendered story of stardom and scandal, “exposing” the human element behind the Hollywood facade and paying nice homage to cinematography. Is the industry of special interest to you? What inspired this context for your story?

Morgan and Jennifer: Like most people, we’ve always been interested in pop culture. Movies, television, books and music are all things we enjoy, but we would never say we’ve been obsessed with the celebrity culture. Morgan has spent much of his life actively involved in live theatre and was able to take those human experiences and transfer them to our fictional movie set, but the entire novel generated from just one image in Jennifer’s mind. Specifically, it was the moment when Shaunna Noble quits her job as Kyle Petersen’s publicist, storms out of his movie trailer and tosses all of his clothing to the fans gathered nearby.

Jennifer didn’t really understand who Shaunna was or why she was so angry at the movie star, but it was obvious that the blow up was taking place on a movie set. The rest of the novel was developed around that one moment – finding out what events led up to the outburst, trying to understand how someone could be driven to such rash action and wondering about what would happen to Shaunna in the aftermath of such an explosion.

Morgan and Jennifer: Your novel jumps between the 1920’s and the 2000’s. Do you have a particular fondness for the Roaring 20’s? Why did you choose that era specifically?

Rumer Haven: The Great Gatsby has always been one of my favorite novels, so while I couldn’t aspire to Fitzgerald’s talent, I wanted to attempt a similar atmosphere. I’m also fascinated by the New Woman who emerged during that decade. There’s the iconic flapper, of course, who really pushed the envelope by shortening her hair and hemline and partying like a rock star. But women at large had also just earned the right to vote and were generally shedding the corset of Victorian mores to make more choices for themselves regarding work, education, and sexual freedom. And let’s face it, the fashion was exquisite! As was the architecture—I knew I wanted this story to be my homage to sweet home Chicago, and there are so many structures that were in their heyday back then that are still standing now. They provide an ideal bridge between past and present, and Capone’s Chicago is a classic backdrop for decadence and dodginess.

Rumer Haven: Your novel is perhaps the first I’ve read that was a collaboration of two authors–and a husband and wife, no less. You two clearly make a brilliant team in writing something so uniform and seamless, so I can’t help but ask how you approach this process! What role do each of you play in crafting the content and composition?

Morgan and Jennifer: Those who know us often describe us as a case of Opposites Attract. Morgan is extroverted, while Jennifer is introverted. But despite the extremes in our personalities, we have a lot in common. Writing fiction is something we both feel deeply connected to, and as such we’ve discovered that we work well together.

As a team, we’ve always outlined stories together through the process of collaborative brainstorming. When it comes to composition, Morgan tends to be focused on providing the unexpected, yet essential details within scenes, while Jennifer tends to be fixated on the bigger picture, making sure all the elemental plot points are addressed. Beyond this, Morgan lends more of his humor to the writing process, while Jennifer enjoys drawing emotion out of both the characters and the reader. Overall, it seems to make for a good balance.

Jennifer: As someone who works in a non-profit visitor facility, I recognized much of the behind the scenes action at the Planetarium in your story. I’m curious to know if those sections of the story are based on real life experience?

Rumer Haven: Yes! I used to volunteer at the Adler Planetarium in Chicago. For the record, the volunteer coordinator was not a ho-bag like Vicki but a very lovely, respected member of staff. 🙂 But I did assist the education department with the sorts of activities and events that Kate manages and loved the experience and institution (and Atwood Sphere!) so much. I was actually a finance professional at the time, but working with the public at Adler inspired me to become a teacher. So in homage to the memories and meaning that place holds for me, I wove it into the book.

Morgan: What is your favorite celestial body in the universe?

Rumer Haven: Just…stars. The whole lot of ’em. Like us, they pass through a cycle of life, yet even when they die, they shine on through time and space. They give us something to wish on, to create pictures and stories out of, and they can guide our way home. Our closest star gives us life and keeps us warm in the daytime, and at night, all the distant stars bedazzling the sky make me feel at once infinitesimal yet integral to something greater than I can comprehend. We’re all made of stardust, lest we forget. 🙂

Rumer Haven: Given my great fondness for Exposure and you lovely folks, I cannot wait for your next book. Anything new in the pipeline?

Jennifer: Speaking of stardust and planetariums … I’m writing a story I’ve entitled Constellation.  It’s a May to December contemporary romance set in Central Oregon. The story begins with the two main characters, Jack and Kathleen, having just given in to the temptation of mutual attraction.  The rest of the novel explores how this one spontaneous event will alter how Kathleen perceives her universe. When I initially began the story I thought Jack would be a man of mystery, but the deeper I get into the story  the more I realize that Kathleen is the one with all the secrets.  I’m halfway done writing the book and realizing I actually have a series in the making. I can easily envision two more books and that has me very excited right now.  I’m hoping to publish the first book later this year.

Morgan: I am currently editing a book that I wrote for NaNoWriMo (National Novel Writing Month) in November of 2013. It’s a ghost story called Connection and it takes place mostly on the N train in New York City. I establish new rules for ghosts while reinforcing some of my old favorites and, believe it or not, the whole thing is a tender romance.